This week’s Torah portion brings us to a change of the central characters of the Torah. Up to now the patriarchs were the main characters: Abraham, Isaac, Jacob, and their whole family.

In this Torah portion we are introduced to new central character, yes, from Jacob’s family, but one that takes the central stage from now to the end of the book of Genesis. This character is Joseph, the son of Rachel, the son of Jacob.

The reading of this Shabbat is from the Torah portion called Vayeshev, from Genesis 37:1-40:23. For the Haftarah (the portion from the prophets) the reading is from Amos 2:6-3:8, and from the New Testament we will be reading from the Gospel of John 19:16-27.

In the Torah portion Vayeshev, the projector light is moved off of Jacob, and is focused on Joseph. Here starts a whole new character — one of Jacob’s family, who is a clear antihero.

The Torah portion of Vayeshev starts with these words:

“This is the history of Jacob. Joseph, being seventeen years old, was feeding the flock with his brothers. And the lad was with the sons of Bilhah and the sons of Zilpah, his father’s wives; and Joseph brought a bad report of them to his father.” — Genesis 37:2 [NKJV]

I find it strange that suddenly Jacob is no longer the central character of the story. We skip over all the events of Jacob’s life, directly to Joseph, a 17-year-old spoiled boy, the second-to-youngest son.

It is a jump over 11 of Jacob’s older sons, and over Jacob himself. And now this 11th son of Jacob, almost the youngest, takes center stage up until the end of the book of Genesis.

The unmoved mover of all things is seemingly the Almighty God Himself. Joseph is the first son of Rachel, Jacob’s beloved wife. She, like all the mothers of the nation of Israel, was barren and could not have children, until the birth of Joseph her first son. In fact, Rachel died in the birth of her second son, Benjamin.

Joseph’s story in the Bible has several of the classical stages: Joseph is no hero in the first stage of the story. In fact, Joseph is an antihero.

He is one of the youngest, his brothers seem to hate him, and even his father and mother seem to not understand him and his dreams.

Particularly Jacob should have immediately accepted and identified with Joseph’s dreams. But Jacob comes to Joseph with this admonition:

“So he told it to his father and his brothers; and his father rebuked him and said to him, ‘What is this dream that you have dreamed? Shall your mother and I and your brothers indeed come to bow down to the earth before you?’” — Genesis 37:10 [NKJV]

Yes, the unmoved mover, the God of Abraham, Isaac, and Jacob, is behind the hate and alienation of Joseph from his brothers, and partially also from his father.

The second element that caused the problem is that Jacob loved Joseph more than the other brothers, and treated Joseph with extra attention. He gave him a special coat of many colors.

It is interesting to see an Egyptian painting that describes a group of Habiru (Hebrews) from Canaan going down to Egypt. This wall painting is named Beni-Hasan, and in it there is a caravan of people with donkeys and equipment, wearing clothing striped with many colors. The painting is from the walls of the Tell-el Amarna in Egypt, from the palace of Pharaoh Akhenaten and Queen Nefertiti: 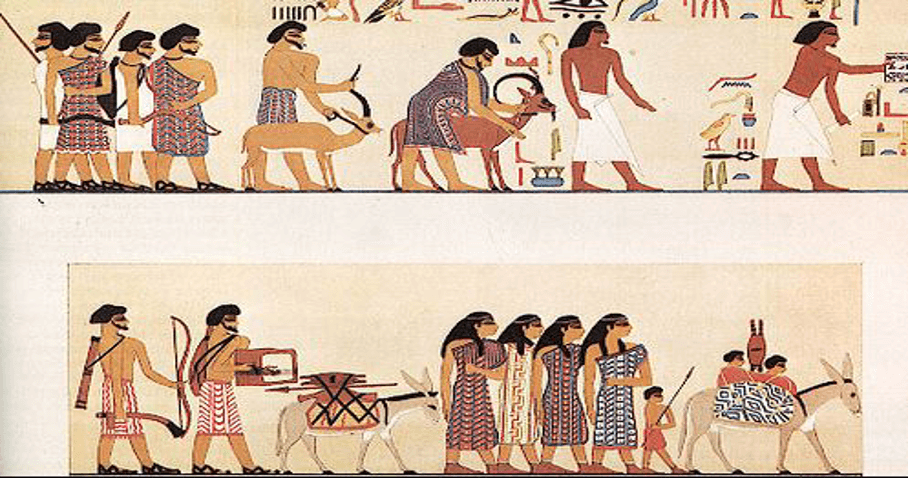 These could be contemporaries of our forefathers, who in the book of Genesis went to Egypt for commerce and food. It could describe the unique clothing that these travelers from Canaan to Egypt wore during the period of the monotheistic Pharaoh Akhenaten.

The major elements of the story of Joseph and his brothers are three classical building stones of successful novels: being at the top and dropping to the bottom (from riches to poverty), rising from the bottom to the top, and a 180-degree restoration of a broken relationship (from hate to compassion).

In the Joseph story, all these elements are played to the maximum. The drama in the story of Joseph and his brothers goes forth like a classical drama, easily competing with Victor Hugo’s “Les Miserablés”.

The questions that come to my mind for the hate and disdain of Joseph’s brothers against him are a kind of prophetic circus-mirror of the attitude and hate of specifically the Christian nations and churches against their brother, the nation of Israel, the Jewish nation. The same paradigm of the story of Joseph is also the story of Yeshua, that is still playing, and the end is still not so clear and visible to the uninitiated, and those who stand on the outside looking in.

There is a Jewish concept (mantra) that says, “The deeds of the Fathers are the signals (signs) for the sons.” The way our first prime minister of Israel, David Ben-Gurion, interpreted our history is that “the Light from the past is our path for the future!”

Our history as a nation, as a people, is so much like that of Joseph! Israel, the Jewish nation, is chosen to be a holy priesthood to serve the world, all the nations, and provide the rules and regulations of what is right and what is wrong, what is just and what is not just, what is a blessing to humanity and what is the opposite of a blessing for humanity.

The biggest blessing of humanity is a Jew born in Bethlehem, accused of being illegitimate. He was rejected by the Jewish people, by the Jews with whom He was raised, and by those from His village.

The enemies of Israel accepted this Jew, and made Him their God. The hate of His brothers backfired. However, the future is secure and powerful, the one that was rejected will be the king, the last shall be the first, the tail shall be the head!

This is the essential central truth of the story of Joseph, and the story of Yeshua. The crown of thorns that was on Yeshua’s head will become the crown of King David — King of Kings and Lord of Lords! All flesh will worship Him and prostrate themselves before Him, and sing the song of Moses and the song of the Lamb.

Every Jew in the world, and every disciple of Yeshua in the world, needs to read the book of Genesis, from chapter 37 to the end, at least one time per year, and put himself in the place of Joseph.

First, experience the love of God and put on the mantle of salvation, like Joseph’s coat of many colors. Second, every Jew and every disciple of Yeshua needs to accept the rejection of men, and even hate and persecution, standing on the promises of God in every word that the prophets of Israel have spoken and written in the Bible.

The end of the Jewish nation and the King of the Jews, the rejected one by his own brothers will be in the end recognized as their savior and the savior of the world. Joseph’s brothers knew that they did their brother wrong, and because of this they feared their younger brother, but they didn’t understand that their brother is their savior and that what they thought was for bad turned out to be for good!

This is the story of Joseph, the son of Jacob, and his brothers. It is a mirror of what was going on with Yeshua and Israel, but the end is also mirrored for the end of history — Yeshua the Messiah, rejected and hated by His own brothers, will one day stand as King of Kings, and the Jewish nation will fear Him. But He will say to all the missionaries and Jew-haters in the world, “go out of the room”.

“Then Joseph could not restrain himself before all those who stood by him, and he cried out, ‘Make everyone go out from me!’ So no one stood with him while Joseph made himself known to his brothers. And he wept aloud, and the Egyptians and the house of Pharaoh heard it. Then Joseph said to his brothers, ‘I am Joseph; does my father still live?’ But his brothers could not answer him, for they were dismayed in his presence. And Joseph said to his brothers, ‘Please come near to me.’ So they came near. Then he said: ‘I am Joseph your brother, whom you sold into Egypt.’” — Genesis 45:1-4 [NKJV]

This scene will repeat itself in the end of history, when Yeshua will land on Mount Zion and say to Israel, to the world, and to all His disciples, “I am Yeshua your brother!” Both the Jewish people and the Christians in the world will cry and embrace and kiss each other, and recognize each other’s sins and mistakes and rejection of each other. And now that deep valley of rejection will be filled with the tears of repentance by every one on both sides of the chasm.

For now we must all make sure that we demonstrate patience and support and wait patiently for that moment that Yeshua will say to Israel, “I am Yeshua your brother! What you thought for bad God has turned for good, and for your salvation and the salvation of the whole world!”