Our 2015 Behold Your God outreach campaign is now in full swing. Our team has been out daily on the streets and beaches along the southern shore of Israel, reaching our Jewish brothers and sisters with the Good News and gathering the contact information of those who would like to know more about Yeshua. Even in the first few days, we have already handed out over 17,325 broadsides, taken the contact information of 93 unsaved Jewish people, and spoken to 678 people over the phone about the Lord.

Praising the Lord in the Persecution

From the start of this campaign our team has faced opposition both physically and spiritually. Two negative articles have been published already on local (Ashdod, Ashkelon) news sites. One, from a writer who was clearly angry about the work that we are doing, went so far as to state that our broadside was geared toward children—a claim that is both false and meant to incite others, including the authorities, against our organization. And yet, we praise the Lord for such persecution as it helps to get the word out in the community about our presence and the simple fact that we are Jews who believe in Jesus as the Messiah, an idea which is both foreign and intriguing to many Jews who’ve never heard about us before.

Laura Barron, one of the campaigners and a missionary from our Toronto branch, reports: “The first ten minutes of our first sortie brought our first opposition. I was closely filming a religious man phoning his friends to report a ‘missionary sighting’ and he was being careful because I was so close to him. I looked at the video later and saw that I had recorded the conversation that Hannah was having with a driver who pulled over to ask her about Yeshua. We left before the opposition came, but this man had to listen to us sharing the message while he did nothing. 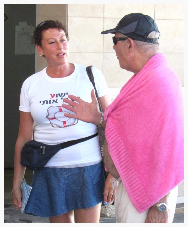 We moved on to our second site and we had just got the banner up when a policeman pulled up right next to us and told us we couldn’t do what we were doing there. As I spoke to him and showed him my paperwork, he told me to leave and go to the station. I asked him sweetly if he could call for me since his Hebrew was so much better than mine. He chuckled and called. I waited next to the car and saw that he received a picture of another team holding the big banner on a bridge. We hadn’t even been out for an hour and the news seemed to be traveling fast! In the end, he told us we could stay and do what we were doing and he ended up being our special police escort! So on the first day of campaign, we had established permission from the police station to do bannering in that city.”

Oded Cohen, one of our missionaries, reports: “We went to do surveys in a business center and there were very few people but we were still able to get a couple of contacts. Then we began putting tracts onto parked cars. When we were almost finished, a religious man approached us to tell us that we couldn’t do what we were doing. He was angry and insisted that we were breaking the law. I spoke with him calmly and urged him instead to consider the message. His countenance changed and he later gave me his contact information and asked me to send him a book about Yeshua.

“As you can see, in spite of opposition, our team of 30 people continued their work on the streets in full force handing out broadsides, holding giant banners, making hundreds of phone calls, and advertising on the local media. Even over the weekend, our team was out and about, meeting with Israelis and sharing the gospel. One campaigner noted, ‘Shabbat [Saturday] is a great day to reach all the Israelis celebrating their day off on the beaches. Every beach on the south shore is filled with people enjoying the warm weather and the beautiful sea.’

“I had a long conversation with the last couple I approached on the sand and as we talked she moved from an atheist position to an agnostic one. She said she couldn’t believe in God after her daughter took her own life but at the end she agreed to let me pray for her and thanked me for the lively discussion. Please pray for Zoharah and her husband Zohar.”

Igal, one of our missionary interns, reports: “We opened a table near the beach and offered free literature. We got into a lot of great conversations but only had six contacts. We were about to wrap up and I asked the Lord for more contacts. Just then, in the last four minutes, I shared the gospel with a girl who stopped by and was extremely open and interested in the gospel. She gave me her information so we could be in touch with her and took a book home. I felt like God had answered our prayers and had sent her to speak with us before we left. In all, we gained seven contacts while at the table.”

Karin, one of our campaign stewards, reports, “We were on our way to a bannering site which was quite a trek.  I was on my way back to take some photos of the banners when I ran into a man who had seen the banner previously and had made the effort to drive all the way to where I was to ask me what it meant!”

Praise God that He is stirring the hearts of the people. May those who are seeking enough to chase us down to hear more, truly have their veils lifted to see the truth in the message of Yeshua our Messiah and Savior.

Vladimir, the campaign leader, asks that you please be in prayer for the following:

We appreciate and thank you for partnering with us in the work that we are doing in the land of Israel.  We hope to send you further updates in the coming days.