Stunning! This was our first impression when we looked from Mount Nebo in the direction of Israel and started recalling the stories that took place in that region.

Moses died there, after he prepared the nation to cross the river into the land of promise. He also warned them to not play the harlot with foreign gods, or else, the very Angel who led them in a pillar of cloud and fire, would be hidden from them.

A statue of copper snake on Mt. Nebo

Balak, king of Moab, was terrified by a possible invasion of the Israelites, so he hired Balaam to curse them (Num. 22). When that didn’t work, he introduced Israel to the worship of Baal (Num. 25).

1. The very thing Israel had been warned against – to not bow down to idols – happened right there. And so, the punishment of the Hidden Faces went into motion (Deut.
31:16-18).

3. Moab was cursed for ten generations, for hiring Balaam and for not welcoming Israel (Deut. 23:3-4).

It was quite powerful to stand where both the announcement of the judgment took place, and where the promise was given, and look from exile into the promised land. We found an isolated spot on one of the mountain tops, and started praying. 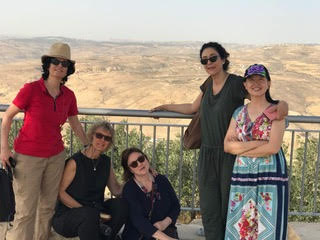 Rania started to pray and decree, “LORD, come and show your Faces again. We invite the Angel of the LORD back into the land.”

“Could it be,” she asked, “that God would want to reverse this verdict today, at the very location where this punishment was pronounced, by another Jewish person?”

We asked God to forgive us, since we turned the Angel of His Faces from being our Lover into our enemy (Isa. 63:9-11). We then asked Him to divorce Israel (and us) from the Baals that we had embraced – all the false husbands and masters that we have bowed to. We repented and divorced ourselves from them as well. I pleaded on behalf of Naomi, and my companions (my Ruths) did the same as they stood alongside me.

I tried to look into God’s eyes, but realized that I could not see His Faces. So I started declaring Numbers 6:24-27: “The LORD bless you and keep you. The LORD make His Faces shine upon you and be gracious unto you. The LORD lift up His Faces and give you peace.”

As you listen to the prayer, look at the necklace I am wearing…

“LORD, just about the time you were to give us the gift of marriage to you, we embraced Baal, another husband. Forgive us for taking another yoke. We nursed on foreign breasts. We gave in to our curiosity for foreign gods and worship methods. Show me your Face.”

Hermana had brought a colorful necklace on the trip, thinking one of us would like to wear this decorative jewelry. But at that moment it seemed as if it would serve better as a symbol of what I was repenting of. Treating it as an item of harlotry, witchcraft and defilement, I cut it to pieces. We decided to burn the destroyed necklace, while proclaiming  our turning away from idolatry, false lovers and masters.

Priscilla prayed: “I realize that the Lord has already taken care of this on the cross. But as an outward sign of agreement with the cross, of my love for the Lord, for Orna and her people and for my land (Jordan), I declare that the ancient earth, abused by those who worshiped other gods, would not continue to have a hold on the feet of the children of Israel. Be free – in the name of the Lord. Come away from false gods and follow your Messiah – the One who awaits you.” 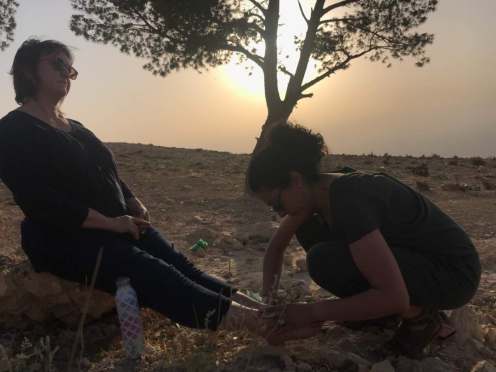 Priscilla anointed my feet while praying

Speaking to the Heart of Moab and Amon

Modern Jordan lies in the region where a few Biblical kingdoms and nations resided: Edom, Moab, Amon, just to name a few.

When I opened my eyes again, I did not see the land of Israel or our wound. This time I saw Jordan. “I want to speak to that place in the heart of Jordan, where you feel like you do not belong, that you are not His, that you do not have a Father. I want to speak to the Moab and Amon in you. And to the older brother that gave up his birth right (Esau – Edom). I speak to you and open ancient doors, and say: you are welcome… be comforted and receive the mercy of the Lord.”

Up the Mountains to Medaba

After more prayer along these lines, we (especially I) were exhausted and emotionally spent at the end of the day. From sharing the heart of bitter Naomi with my Ruths… to weeping the dry tears of Israel and myself… to having China come alongside me. Then repenting on Mt. Nebo and renouncing the practices that brought about the provocation and estrangement from our God in the first place – that was pretty intense.

Our hostesses took us to a charming old Arab House restaurant, and treated us with some beautiful Jordanian crafts and traditional foods. 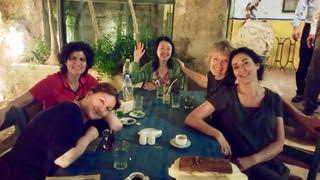 We were ready to call it a day!

This article originally appeared on Ot OoMofet Ministries, August 14, 2018, and reposted with permission.

"On your trip to Israel it is worthwhile to put Beer Sheva on the itinerary, and see for yourselves the faithful flowing stream of redemptive history – from the ancient map to the map of these end-times." https://buff.ly/2HEx68k #kehilanewsisrael #kehilanewsisrael #Aliyah

"The truth is that the reason the king didn’t know Joseph was because Israel had become so much a part of Egypt that their light of testimony had gone nearly out." Eric Tokajer, author. https://buff.ly/2Hh3ZYT #kehilanewsisrael #messianic #messianicjews #messianicjudaism

Daniel Yahav shares on 'The secret that sets us free from anxiety' based on Philippians 4:6-7. Hear & watch it at https://buff.ly/34hcnQw #kehilanewsisrael #biblestudies #messianic #messianicjews #messianicjudaism