This happened again to us on January 20th, 2021, Inauguration Day in America. Here is a report with what we were proclaiming, confirmations with hail (a fairly rare phenomena here in Jerusalem), and the times (in Israel Standard Time).

When I (Patricia) started the noon watch, I began singing about freedom from lies. Hail started hitting the window near the piano and as I watched the hail come down, I thought of a Scripture we have often proclaimed over governments of nations, Isaiah 28:17:

“I will make justice the measuring line, and righteousness the plumb line; hail will sweep away your refuge, the lie, and water will overflow your hiding place.” – Isaiah 28:17

Rick was downstairs, and took the following photos of light hail on a table on the balcony of our apartment: 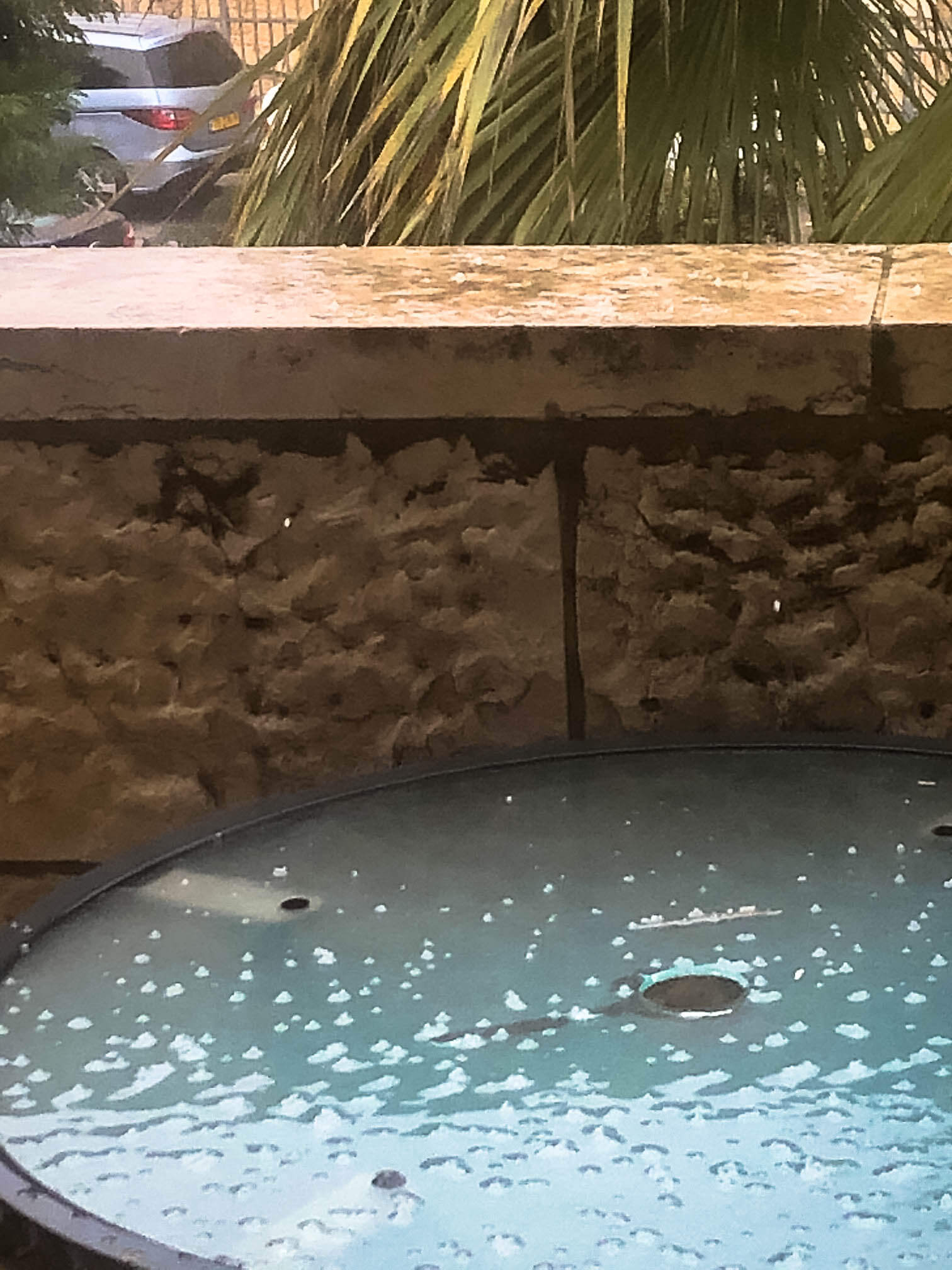 By the time Rick came upstairs, the hail had died down some, but as we were worshipping he suddenly felt an urgency to read from Exodus 9:13-33 about the plague of hail. The damage from this hail was a severe strike on the economy that was supporting Pharaoh. When he said the word “hail” in verse 23, it started hailing again!

Soon the sun came out and it stopped hailing. When I started reading from Isaiah 28 we entered into deep intercession about Jerusalem and Israel, and the need for greater unity here.

Then we prayed for the Body of Messiah, identifying with them and weeping. When I started reading in Isaiah 28 again, I got to the part about hail sweeping away the “refuge of lies” (Isaiah 28:17), and there were strong gusts of wind and larger hail stones began pouring down!

This is a photo we took of the heavy amount of hail that had fallen on the window while we were praying: 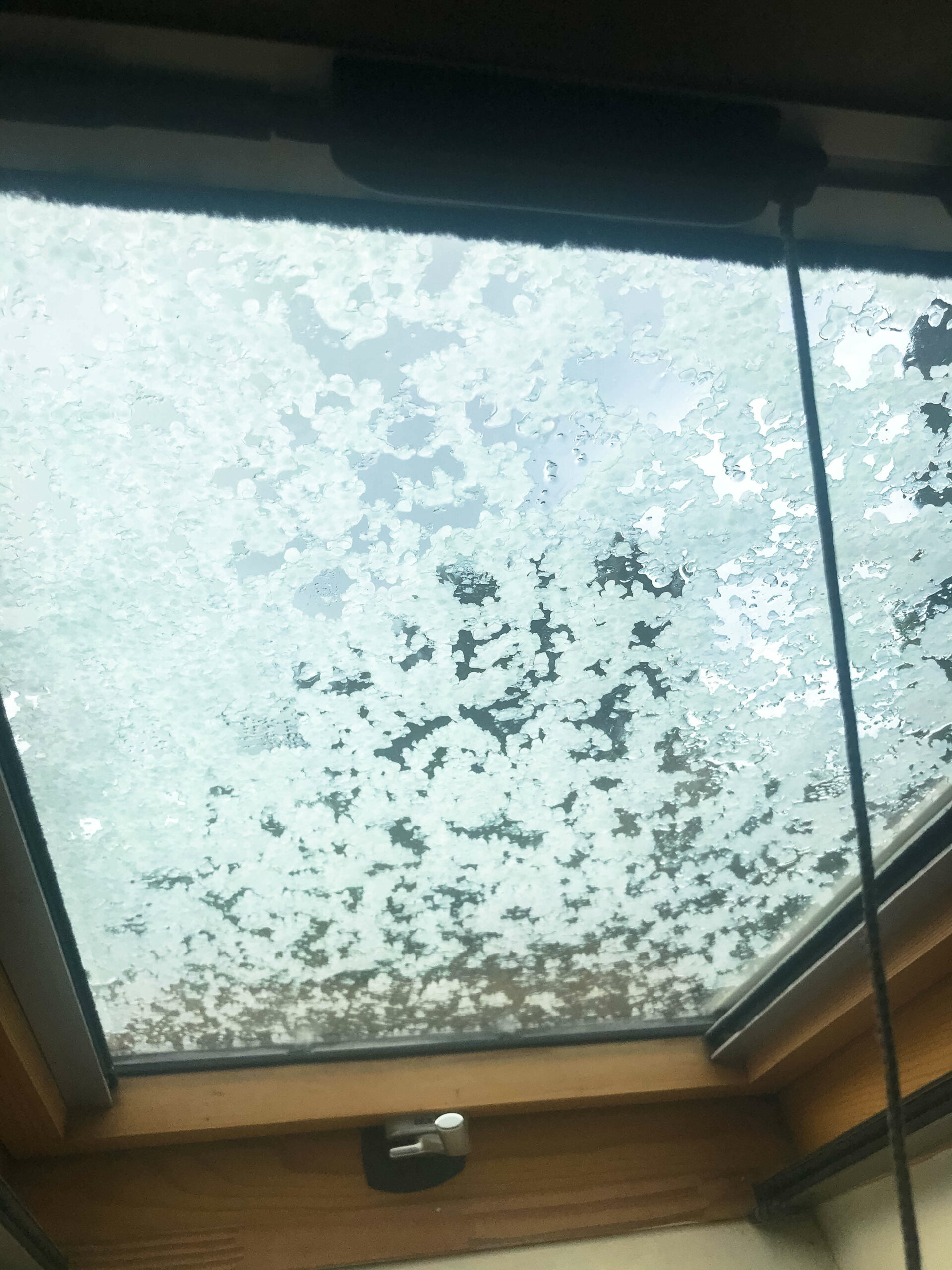 “The Lord will rise up as he did at Mount Perazim. He will rouse himself as in the Valley of Gibeon — to do his work, his strange work, and perform his task, his alien task. Now stop your mocking, or your chains will become heavier.” – Isaiah 28:21,22a

“…the Lord hurled large hailstones down on them, and more of them died from the hail than were killed by the swords of the Israelites.” – Joshua 10:11

While Rick proclaimed that passage, it was still hailing. The moment he finished proclaiming the passage, the hail stopped again!

Here is a photo of the blue skies that appeared: 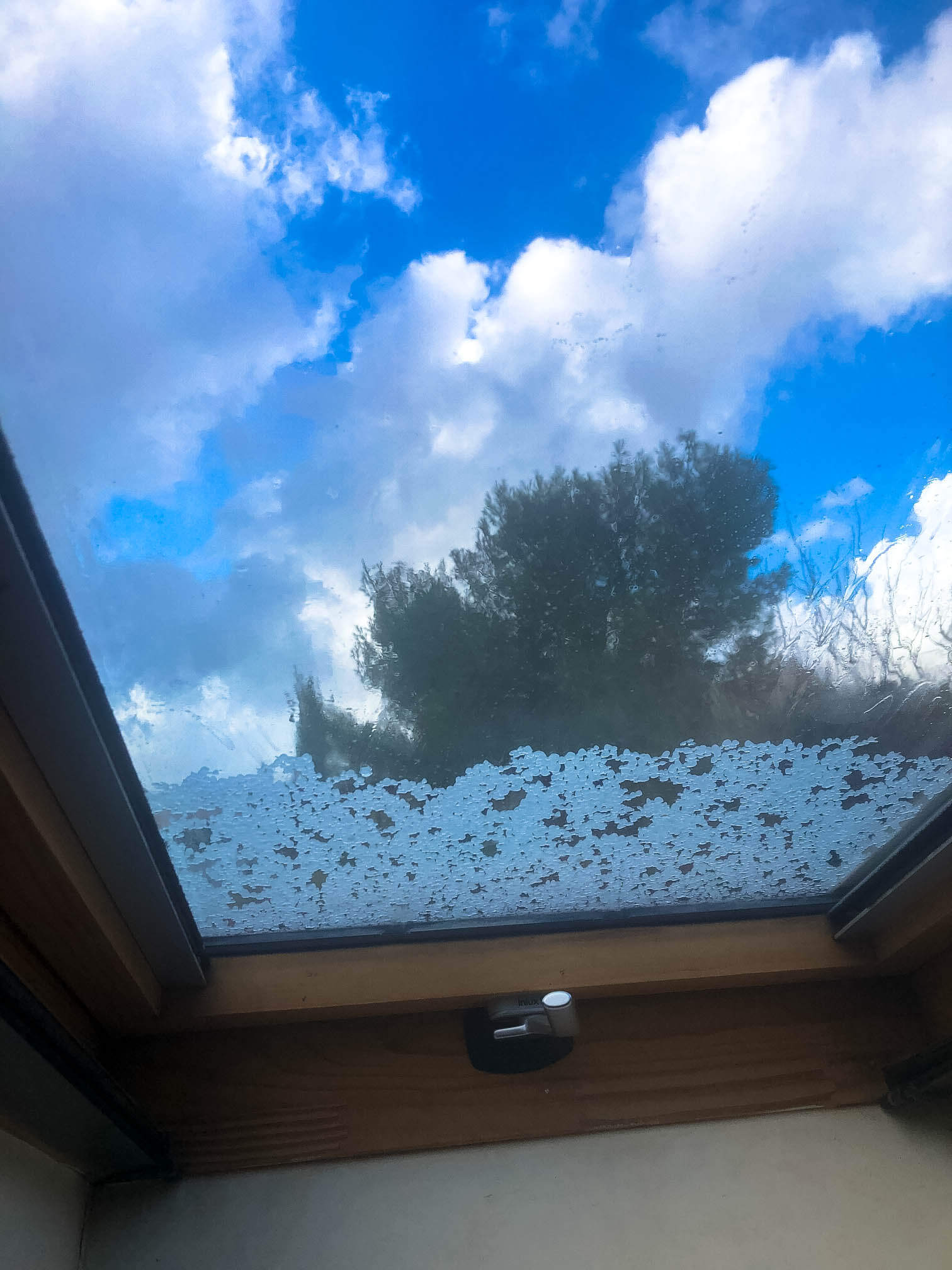 Rick then read the rest of that passage, Joshua 10:16-25, about the defeat and death of the five kings of the Amorites, who were leading the battle against Israel.

He felt it was significant that they were Amorites, as on Monday morning, before we began our watch, he had sensed, and posted on our “Government Watch” chat concerning those opposing God’s purposes in government these verses:

“Yet I destroyed the Amorites before them, though they were tall as the cedars and strong as the oaks. I destroyed their fruit above and their roots below. I brought you up out of Egypt and led you forty years in the wilderness to give you the land of the Amorites.” – Amos 2:9,10

That verse reminded us of a very significant night, as it was one of the verses the Lord gave us on March 28th, 2002 when we gathered our Succat Hallel community together for 24 hours of prayer.

We were meeting in a church in the Old City for the first watch of the night, singing “Arise, O Lord, let Your enemies be scattered!” Little did we know, the Prime Minister of Israel and his cabinet leaders were right across the street from our prayer meeting having an emergency government meeting to plan what to do about recent terror attacks!

They met almost all night to decide about a military operation in response to a major suicide bombing that had just taken place at a Passover Supper celebration in Netanya. The next day, Israel launched “Operation Defensive Shield”, which proved very effective in destroying the terror cells responsible for this and other suicide bombings of innocent victims.

As we desperately prayed through that night until the evening of the next day for Israel, three different teams received Scriptures to proclaim about hail and thunderstorms. Each time verses were proclaimed about hail, it started hailing.

We felt the presence of the Lord so strong in those dark clouds. He truly rides on the clouds, answering the prayers of His people.

We thought back to that significant moment in Succat Hallel, while on January 20, 2021 during our watch the Lord was once again speaking to us from the heavens! We were in awe of the kindness of the Lord.

The Lord wants so much for us to love each other! We prayed for just a short time with compassion for those who disagree with us and the Lord answered from heaven with hail!

His heart is so full of love, and He is not willing that any should perish but all come to repentance, including us! He wants us to humble ourselves and repent of things like wrong attitudes and lack of love. Then He will hear from heaven, forgive our sin and heal our land.

We went back and forth praying for the USA and Israel, as our nations are so connected. In this atmosphere of weeping and receiving the heart of God, it was like we were having a conversation with God through the hail. He kept saying “amen” as he sent hail exactly when we would proclaim the word “hail” from the scriptures!

The hail would start and stop. While the skies were still blue, Rick began to proclaim Psalms 78:47-55, about the Lord fighting against Pharaoh and the gods of Egypt with plagues.

“He unleashed against them his hot anger, his wrath, indignation and hostility—a band of destroying angels.” – Psalms 78:49

Rick suddenly started to proclaim, “We send forth today a band of destroying angels to carry forth the anger of god against the Pharaoh spirit to destroy and cut off their financial supply”. As he proclaimed that, the blue skies suddenly turned again to strong gusts of wind and hail!

The winds were significant, as in Hebrews 1:7 it states:

“And regarding the angels He says, ‘He makes His angels winds, And His ministers a flame of fire.’” – Hebrews 1:7 [NASB]

The strong winds and hail quickly died down, and Rick proclaimed,

“Then the Lord awoke as from sleep, as a warrior wakes from the stupor of wine. He beat back his enemies; he put them to everlasting shame. Then he rejected the tents of Joseph, he did not choose the tribe of Ephraim; but he chose the tribe of Judah, Mount Zion, which he loved. He built his sanctuary like the heights, like the earth that he established forever. He chose David his servant and took him from the sheep pens; from tending the sheep he brought him to be the shepherd of his people Jacob, of Israel his inheritance. And David shepherded them with integrity of heart; with skilful hands he led them.” – Psalms 78:65-72

We prayed that those who are being dominated by a globalist, controlling spirit, would be delivered and lovingly shepherded by a David that the Lord will establish over them.

Here is a photo of the blue skies from our balcony taken right after we had finished this time of prayer and worship: 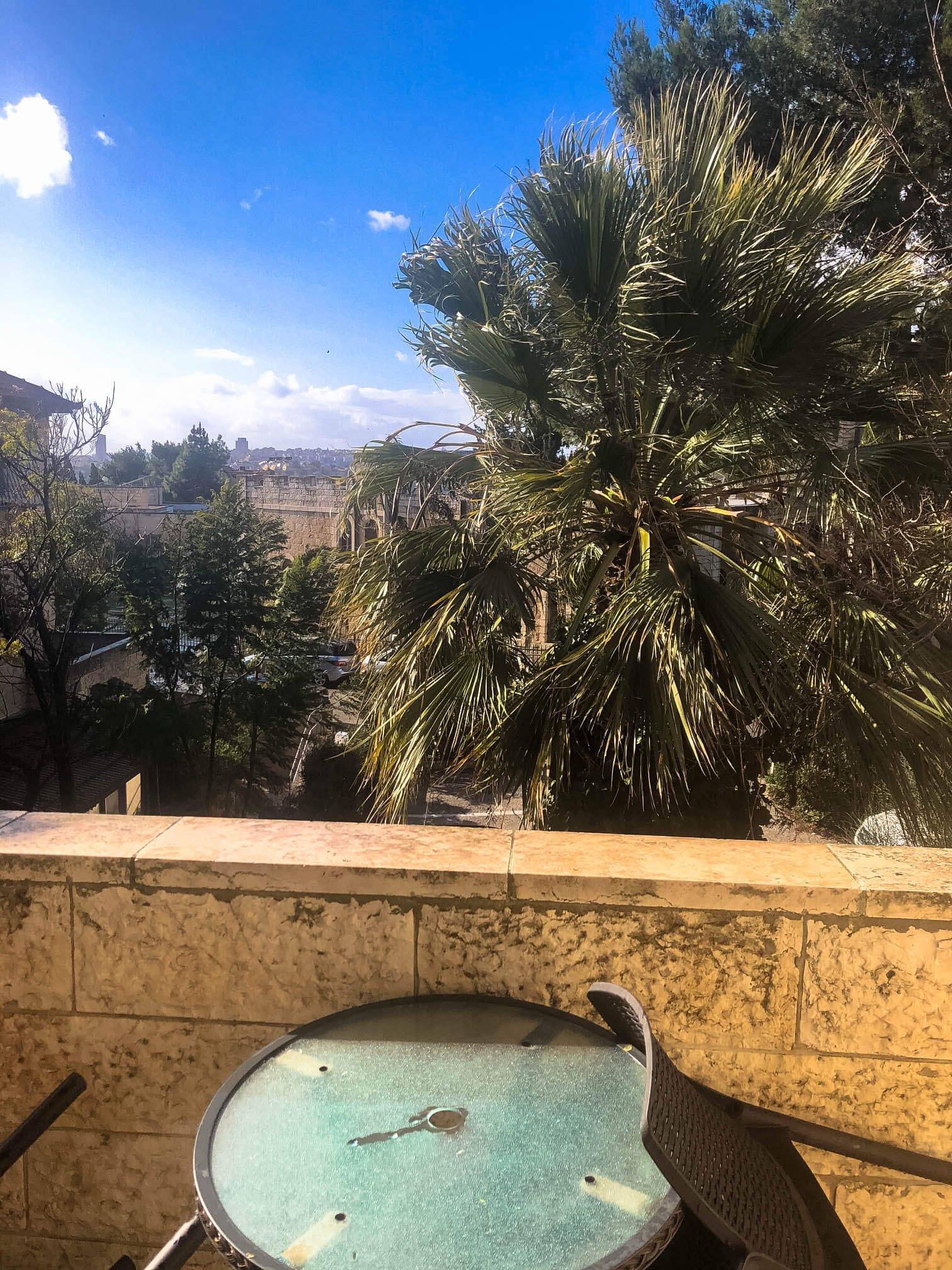 We believe that the Lord was giving His “amen” in confirmation that He is arising and will arise to judge every Pharaoh spirit. We pray that the fear of the Lord may come upon those governmental leaders in any nations that are tools of the Pharaoh spirit.

May they not harden their hearts, as Pharaoh did to his eventual, final judgment. May this be a season of great angelic activity in response to the people of the Lord trusting him, receiving His grace to walk in love, and proclaiming His Word over their nations.

May He strengthen us all to persevere in this epic spiritual battle for truth, humility and justice.

This article originally appeared on Succat Hallel, January 24, 2021, and reposted with permission.