22 And it came to pass at that time that Abimelech and Phichol, the commander of his army, spoke to Abraham, saying, “God is with you in all that you do. 23 Now therefore, swear  to me by God that you will not deal falsely with me, with my offspring, or with my posterity; but that according to the kindness that I have done to you, you will do to me and to the land in which you have dwelt.”

25 Then Abraham rebuked Abimelech because of a well of water which Abimelech’s servants had seized. 26 And Abimelech said, “I do not know who has done this thing; you did not tell me, nor had I heard of it until today.” 27 So Abraham took sheep and oxen and gave them to Abimelech, and the two of them cut a covenant. 28 And Abraham set seven ewe lambs of the flock by themselves.

29 Then Abimelech asked Abraham, “What is the meaning of these seven ewe lambs which you have set by themselves?”

30 And he said, “You will take these seven ewe lambs from my hand, that they may be my witness that I have dug this well.” 31 Therefore he called that place Beersheva, because the two of them swore an oath there.

It seems from the text of Genesis 21 that Abraham named Beer Sheva about three years after Isaac was born (the accepted time of weaning) and shortly after when Ishmael was cast out of the covenanted family of Abraham and Sarah. What we also see is that YHVH God is deeply committed to both lines of the family for Abraham’s sake, as He spoke prophetically concerning both of the two sons. Therefore, both the Jewish people and the Arab peoples have their destinies determined by YHVH, the Everlasting God. The hope of both are in the hands and heart of the one, true, living God.

Tel Beer Sheva is located just outside the modern city of Beer Sheva.  The archeological site dates back at least to the time of the Kings of Judah before the Babylonian exile, and could possibly be the site which Abraham named close to 3900 years ago. The well here is about 70m deep, and on a hot day we can appreciate the importance of available and drinkable clean water in the Negev desert! 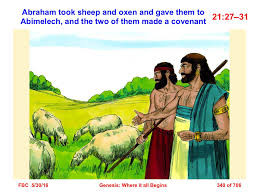 The name of Beer Sheva comes from the covenant oath with seven ewe lambs between Abraham and the Philistine king Avimelech. The name means “Well of the Oath/Seven”. The dispute then, and often now, is over the need for water sources and access.  Perhaps from here Abraham took his son Isaac to Moriah (what is today’s Temple Mount in Jerusalem) as a willing sacrifice – which thankfully the Angel of YHVH stopped in motion, as He had greater plans — and then returned to Beer Sheva. (Gen 22:1-19) 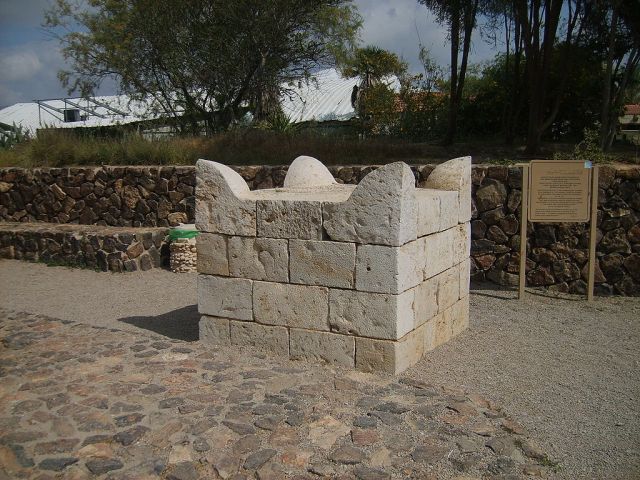 At the entrance of the Tel Beer Sheva National Park (a UNESCO World Heritage Site), just after paying the entrance fee, you see a replica of a four-horned altar, whose original was found during the archeological dig on the tel (which means ‘mound’) in the 1970’s and can be seen in the Israel Museum in Jerusalem. This replicated altar reminds us of at least two things: it is not built according to God’s instructions for altars, since this one is made of hewn/cut stones. YHVH commanded that altars for sacrifices unto Him should be constructed of unhewn stones.  Secondly, during the days of King Hezekiah before the Assyrian conquest and exile of the Northern Kingdom, and the days of King Josiah, before the Babylonian exile and destruction of Jerusalem and The Temple – there was revival in Judah, and these two kings did much to take away or destroy false objects of worship around the kingdom.  This altar reminds us that in Beer Sheva the Jewish people were offering sacrifices outside of Jerusalem, where God had required them to sacrifice. Beer Sheva was burned in 701BC by the Assyrians under the leadership of Sennacharib. 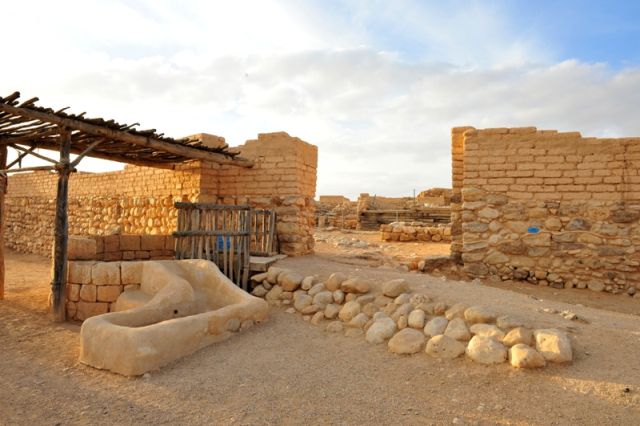 Up at the tel, at the gateway into the ancient settlement, is a water well.  This well is about 70 meters (~230 ft) deep, one of the deepest wells which have been discovered in Israel.  A source of drinking water, and free access to it, was, and is, an essential element of any populated settlement, whatever its size.  The tel is situated well above the lower plain below, and provided a strategic defensive overview of the surrounding territory in the desert. 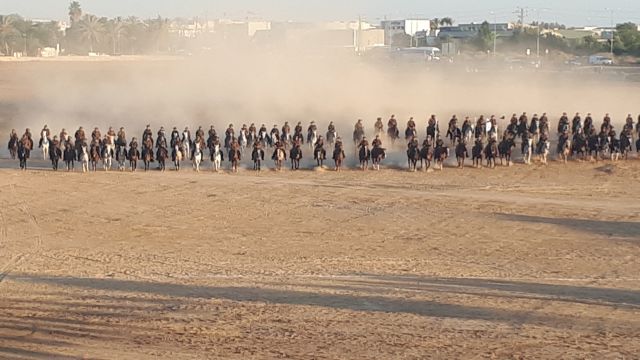 Also near the well can be seen a recent memorial to commemorate the New Zealand Mounted Rifles regiment which took part in the events at Tel Beer Sheva (Tel es Saba, in Arabic) on that eventful day of October 31, 1917, during WW1, made famous by the Australian Light Horse Charge across these plains to capture the town of Beer Sheva from the Turks, with the precious wells of water in their control.  We have Hebrews Chapter 11 to remind us of those heroes of the faith who have paved the way of redemption for us who believe in the God of Abraham through living faith in Jesus Christ/Yeshua the Messiah, His Son of covenant promise.  So, too, the heroic soldiers of the Kiwis and Aussies who fought so bravely thousands of miles and kilometers away from their own families, home, and country . . . willing to sacrifice their lives for the freedom of others – in our particular case, for the Holy Land to be delivered from Islamic rule, and to set in motion the return of the Jewish people to the promised land which YHVH God promised to the seed of Abraham, of Isaac, and of Jacob/Israel.  We are living in the end-times of the last days, and this ancient Tel Beer Sheva has had a part in the beginning and in the end! 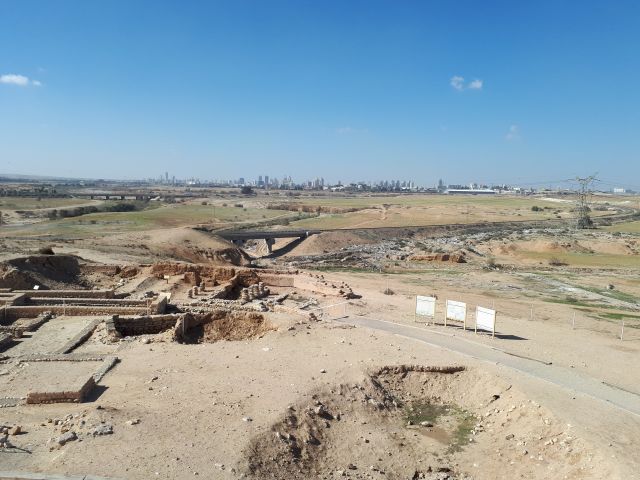 Standing on top of the observation tower of the ancient site, there is a clear view of the modern city of Beer Sheva, and of the Bedouin towns and nomadic life all around the area.  The ‘Old City’ of modern Beer Sheva was the only town which the Ottoman Turks built in their 400-year occupation and rule of Palestine.  The modern city today had to wait for the establishment of the State of Israel, when during its War of Independence, Israeli forces re-captured Beer Sheva from Egypt.  Israel is continuing to fight for its existence; and her only hope – and that of the Arab enemies all around – is in the active intervention of the Messiah, the Lamb of God who is also the Lion of the Tribe of Judah, to deliver His chosen people from their hostility to Him, and from the resentfulness of the children of Abraham not chosen by the Sovereign of the Universe to inherit the Land of Canaan.  But even more so, both Jewish, Arab — and all other people — need salvation and deliverance from their sins, which only faith in the shed blood on the cross of the Son of God and Son of Man can accomplish for any and all who repent and believe the gospel.  In the resurrection of Messiah, and of those who are His at His coming again, is the victory over sin and death, to the eternal glory of YHVH, God of Abraham, of Isaac, and Israel – the Father, the Son, and the Holy Spirit! 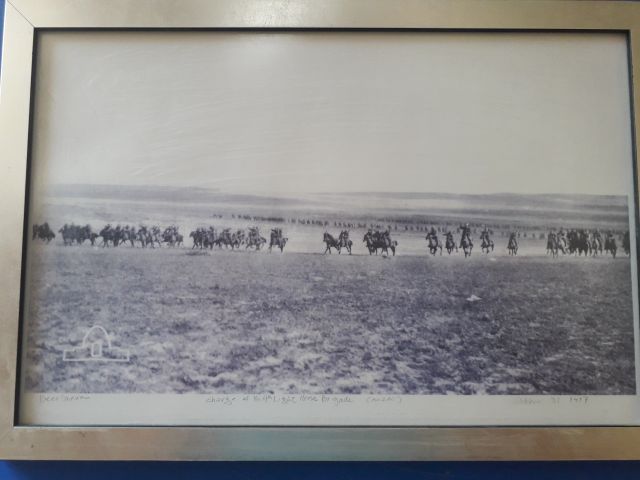 On Oct 31, 1917, during WW1, the New Zealand Mounted Rifles – a component of the ANZAC, Australia and New Zealand Army Corps – captured Tel Beer Sheva from the Turks around mid-afternoon, after the British forces had captured a major junction up the road earlier in the morning.  These victories made possible the now famous Light Horse Charge of the Australians around 4:30 before the sun would set, across the plains on the south-south-east side of the Tel, to capture the wells filled with water that the Turks held in the ‘city’.  Between 500-800 valiant horsemen and horses galloped ~ 6 km/4 miles into the firing Turks, who were shocked and surprised that the gallant horses and their riders continued a mounted charge over the defensive trenches and into the town, capturing many prisoners, and taking the precious wells with refreshing drinking water.  This was a break-through victory for the capture of Palestine and Jerusalem from the Islamic Ottoman Empire after 400 years of rule in the land, and for the whole War.  It lifted the spirits of the ANZAC troops after a crushing defeat in Gallipoli in April 2015, and provided a major boost to the morale of the Allied Forces who were struggling in Europe. 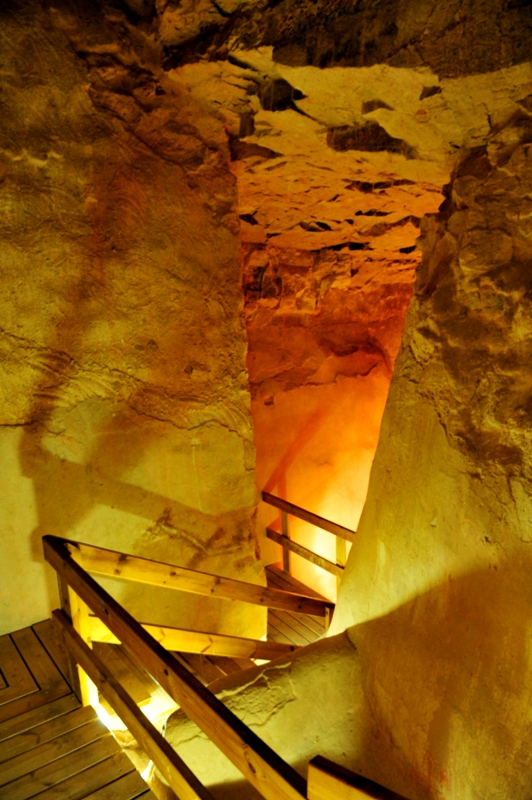 We leave this historic site – past and present – through the large water cistern, a feat of human engineering.  It has a holding capacity of 700m3 (184,000 gallons), and is accessed by the underground staircase.  The underground reservoir was opened to the public only in 2003, and dates from the beginning of the excavated site in the 8th – 9th centuries before Messiah.  In these desert outposts, it was not enough to have a well nearby and accessible; there was also the need to store up large quantities of water for everyday use by the community, and also during times of siege.  The cistern was fed by the Hebron stream.  The coolness of the cistern today is a respite from the heat of the sun on a hot day. 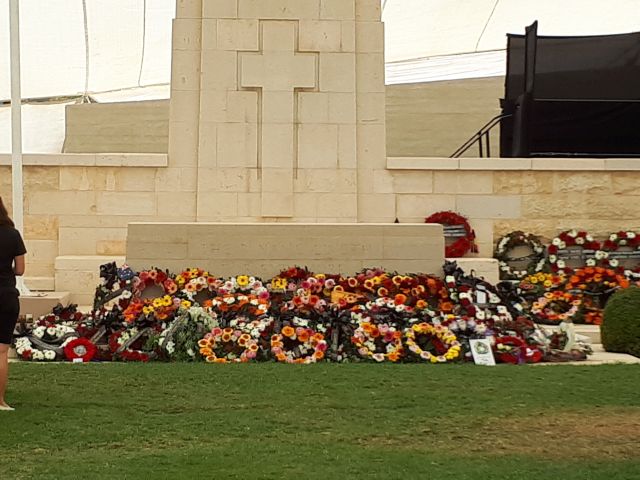 The God of Jacob went beyond the immediate objective of the Battle for Beer Sheva – unknown at the time by the participants. This victory by the ANZAC combined forces paved the way for the Balfour Declaration, and the beginning of the international Gentile world powers legally authorizing the return of the Jewish people back to their homeland after nearly 1900 years of exile. This, in order for the Scriptures to be fulfilled, which God is still going about doing until His people are no longer in spiritual or physical exile, but have returned to Him through repentance and great remorse, and finally place their faith and hope and love in the Messiah Yeshua/Jesus as their Savior God and King.

Redemption comes with a price. That repentance and remorse will come through much travail. God is faithful, and able to complete that which He has begun! Hallelu-Yah! Maranatha!

“ 37 On the last day, that great day of the feast [of Booths/Tabernacles], Jesus stood and cried out, saying, “If anyone thirsts, let him come to Me and drink. 38 He who believes in Me, as the Scripture has said, out of his heart will flow rivers of living water.” 39 But this He spoke concerning the Spirit, whom those believing in Him would receive; ….”

This article originally appeared on Streams in the Negev, November 8, 2020, and reposted with permission.