Yom Kippur begins Tuesday evening and continues until sunset Wednesday evening. This culminates a period of reflection and introspection that motivated Jews around the world to seek to make amends and restitutions with their fellow Jews and their fellow man, as well as with their Maker. As interpersonal relationships are restored it is hoped that the same type of restoration is reached with our Creator, receiving the forgiveness of ADONAI as we approach Him with a repentant heart.

One of the most potent prayers during Yom Kippur is Avinu Malkenu (Our Father, Our King), which begins, “Our Father, our King, we have sinned before You.” After a litany of confessions and supplications, the prayer ends with the plea, “Our Father, our King, be gracious to us and answer us, though we have no worthy deeds; act with us in charity and loving-kindness and save us.” We not only acknowledge our sins against our God but also the inability within ourselves to do anything about it. We are totally dependent on the grace and mercy of ADONAI for forgiveness – not because it’s deserved but because of His loving-kindness. Through the prophet Ezekiel, ADONAI proclaimed His plans for Israel’s redemption, “Then I [ADONAI] will sprinkle clean water on you and you will be clean from all your uncleanness and from your idols. …So I will save you from all your uncleanness,” (Ezekiel 36:25 & 29a). Our responsibility is to turn to ADONAI with a repentant heart; He, in His faithfulness will take care of the rest of situation. Interestingly, “[t]he Talmud teaches that repentance was created before the universe itself (Nedarim 39b). This declaration of the Sages means that the world could not endure without the possibly of repentance; that is why the existence of repentance was a precondition of creation. God would not bring a world into existence if its doom was foreordained.”[i] If Rav Shaul was correct and the Father chose us in Messiah before the foundation of the world, (Ephesians 1:3-4) it would seem that the Sages were correct and the concept of repentance pre-exists creation as well. It was always ADONAI’s plan to provide a way to restore creation to Himself.

For the Jewish people, the intensity of this mo’ed, Yom Kippur, is expressed in the following two passages from Leviticus[ii]:

It is to be a statute to you forever, that in the seventh month, on the tenth day of the month, you are to afflict your souls, and do no kind of work—both the native-born and the outsider dwelling among you. For on this day atonement will be made for you, to cleanse you. From all your sins you will be clean before ADONAI. It is a Shabbat of solemn rest to you, and you are to afflict your souls. It is a statute forever. (Leviticus 16:29-31)

You are not to do any kind of work on that set day, for it is Yom Kippur, to make atonement for you before ADONAI your God. For anyone who does not deny himself on that day must be cut off from his people. Anyone who does any kind of work on that day, that person I will destroy from among his people. You should do no kind of work. It is a statute forever throughout your generations in all your dwellings. It is to be a Shabbat of solemn rest for you, and you are to humble your souls. (Leviticus 23:28-32)

Notice the severity of judgment for non-compliance – “For anyone who does not deny himself on that day must be cut off from his people. Anyone who does any kind of work on that day, that person I will destroy from among his people. You should do no kind of work,” (23:29-30). Fasting (self-denial) and doing no work on the tenth day of the seventh month was declared to be a statute forever. Re-enforcing the duration of this observance, “It is a statute forever throughout your generations in all your dwellings,” (23:31). Not only this statute forever for Israel but also for “the outsider dwelling among you,” (16:29), that is, those who have chosen to come alongside Israel similar to the God-fearers mentioned in the book of Acts.[iii]

As Jewish believers, as well as those who have chosen to stand alongside Israel, this observance remains in force today, as it is “statute forever.” It is true that we have forgiveness though the sacrifice of Yeshua (planned by the Father as exemplified in the Akedah – Genesis 22 and in Hebrews 10:5). This forgiveness, however, does not nullify the dictates of the covenant that records the Yom Kippur observance. Yeshua taught His disciples:

Do not think that I came to abolish the Torah or the Prophets! I did not come to abolish, but to fulfill. Amen, I tell you, until heaven and earth pass away, not the smallest letter or serif [punctuation] shall ever pass away from the Torah until all things come to pass. Therefore, whoever breaks one of the least of these commandments, and teaches others the same, shall be called least in the kingdom of heaven. But whoever keeps and teaches them, this one shall be called great in the kingdom of heaven. (Matthew 5:17-19)

Note that the commandments, which Jeremiah prophesied would be written upon our hearts (Jeremiah 31:33), were still to be taught and practiced, even in the kingdom of heaven. Later Yeshua sets precedence when He chastises the Pharisees and Torah teachers of His day:

Woe to you, Torah scholars and Pharisees, hypocrites! You tithe mint and dill and cumin, yet you have neglected the weightier matters of Torah—justice and mercy and faithfulness. It is necessary to do these things without neglecting the others. (Matthew 23:23)

The problem was not the minute tithing of mint and dill, but the neglect of the weightier matters that brought Yeshua’s discipline. Yeshua specifically mentioned the weightier matters of “justice and mercy and faithfulness.” Justice and mercy relates to our interaction with one another, as does faithfulness. However it could well be said that faithfulness includes the keeping of the commandments, observing the mitzvoth, and staying faithful to the divine appointments set by the LORD, (Leviticus 23) including Yom Kippur. The writer of Kohelet (Ecclesiastes) concludes with the declaration, “God will bring every deed into judgment, including everything that is hidden, whether it is good or evil,” (Kohelet 12:14). Before considering this as simply a pre-Yeshua verse, consider the words of Rav Shaul to the believers in Rome (post-resurrection), “So each of us shall give an account of himself to God,” (Romans 14:12); or to the believers in Corinth, “For we must all appear before the judgment seat of Messiah, so that each one may receive what is due for the things he did while in the body – whether good or bad,” (II Corinthians 5:10).

However one approaches Yom Kippur, it must be done in respect and reverence. Leviticus 23, which contains instructions for all of the moadim, opens with the words, “Then ADONAI spoke to Moses saying: Speak to Bnei-Yisrael, and tell them: These are the appointed moadim [appointed seasons or times] of ADONAI, which you are to proclaim to be holy convocations—My moadim,” (23:1-2). It is as if ADONAI took out His calendar and scheduled specific times to meet with Israel, His covenant people. Each appointment has its own meaning and significance, as well as procedures when meeting with ADONAI. This Yom Kippur let us meet the LORD in the manner He prescribed at the time He ordained. 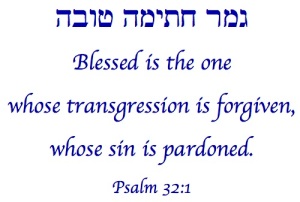 [ii] All Scripture quotations are from the Tree of Life Bible, MJFB 2014

[iii] For clarification, even though the “outsider (or stranger) dwelling among you” is often considered a convert, I see this more as a God-fearer, similar to Cornelius, in Acts 10. He and his family, while seemingly active in the Jewish community, were not looking to convert. Therefore, out of respect for the community, the God-fearers or outsiders dwelling among us should fast on Yom Kippur like their neighbors.